Mechanics of an Elevator: Simple Machines

Simple machines are tools for performing work that enable people to complete a task faster or better than they could otherwise do it. These tools were invented long ago as humans struggled to move or lift heavy objects. Although simple in design, these tools can achieve impressive amounts of force that make many feats possible. The basic simple machines include the lever, the wheel and axle, the inclined plane, the wedge, the pulley, and the screw. It's possible to combine these machines to make compound machines as well.

The lever is a simple machine comprised of a pole or bar used to lift a heavy object. Often, the lever is used with a fulcrum, which braces the rod or pole to increase the force. Positioning the fulcrum closer to the object will make it easier to lift. Choosing a longer pole will make it possible to lift higher. Examples of common levers include a hammer claw, a crowbar, and a bottle opener.

The Wheel and Axle

The wheel and axle may be one of the most common and widely used simple machines. The axle is the rod that fits through the center of the wheel, making it possible for the wheel to turn in a balanced circle. Wheels and axles are present on or in cars, bikes, carousels, motors, and gears. A wheel and axle is even the machine performing the work in a pizza cutter.

An inclined plane is a flat surface with a high end on one side and a low end on the opposite side. The inclined plane makes it possible to move things from one point to the other, either higher or lower. Moving objects with an inclined plane still requires force, but the amount of force required will be less than if you moved the object straight up or down. Examples of inclined planes include wheelchair ramps, walking paths, and chutes.

The pulley is a type of wheel and axle that works with a rope or chain to move an object up and down or back and forth. People use pulleys to lift very large objects or to lower them. Pulleys can also make it possible to lift an object very high off of the ground. Examples of pulleys include elevators, cranes, and the mechanisms in window blinds.

The screw is an inclined plane that is in a twisted configuration, making it possible to move simultaneously in a circle and from low to high. The screw's design takes up less horizontal space, and it is often used to hold two objects together. Common uses of screws are on faucets, bottle caps, and jar lids.

When simple machines are combined to perform work, they become compound machines. Wheelbarrows are built with levers and a wheel and axle. Scissors are two wedges that make up the blades and a lever that enables the blades to move and cut. A fishing rod with a reel is another example of a compound machine. The rod works as a lever, with hands serving as the fulcrum to apply force. The reel of the machine is a wheel and axle that serves as a pulley. A lawnmower is another example of a complex machine. This device includes wheels and axles, which move the lawnmower across the grass as well as rotating the blades in a circle to cut the grass. The blades are wedges that spin very fast to cut. Inside the engine of the lawnmower, additional simple machines can be found, such as wheels and axles, screws, and levers. Even the handle of the lawnmower is a lever that enables the operator to push it and pull it.

There is simply no other company that can offer you all of this.

If you are looking for a customized quote or just want to ask a question, get in touch with Nationwide Lifts today to start talking to a Home Elevator expert. 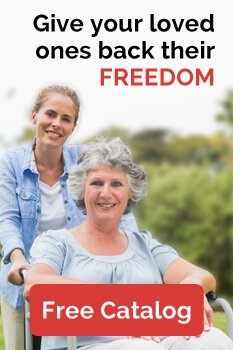 As America's leader in home elevators, we understand your connection to your home and we realize the important role our products have in your lives. That's why Nationwide Lifts is the only residential elevator company to offer its customers a large selection of products, the industry's best warranty, 24/7 phone support and a network of offices across the United States.