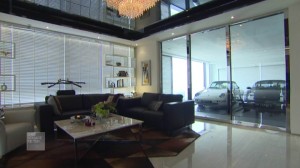 Wealthy residents of luxury apartment buildings in Singapore have a problem: where to park their expensive cars. The Hamilton Scotts residential building in the Asian city-state has come up with a solution. Elevators take cars straight up to apartments and park them in the living rooms.

The “parking lot in the sky” is the building’s standout feature. Residents can transport their cars to their apartments, whether they live on a lower floor, the penthouse, or anywhere in between. The project’s director said the goal was to make a car a part of the living room ensemble, like a piece of furniture.

A resident drives a car into the basement, parks it on a movable metal plate, and enters a code or gives a fingerprint to start the transport process. The car is moved into an elevator shaft that carries it to the appropriate apartment. Each apartment’s sky garage is large enough to house two cars. Residents are not able to ride up to their apartments in their vehicles.

The Hamilton Scotts building was constructed shortly before the 2008 financial crash and soon began to struggle. China-based investment company Reignwood Group took over management of the building in 2013 because it saw long-term potential in the property and the Singapore market. The group wanted to find an iconic building to broaden its name and develop its business. Reignwood Group performed some renovations on the property and added some amenities, such as free breakfast for residents every day.

Hamilton Scotts has 36 floors with 56 units. The building is currently 70 percent occupied. Prices for a 2,755-square-foot apartment start at $10 million.

There is simply no other company that can offer you all of this.

If you are looking for a customized quote or just want to ask a question, get in touch with Nationwide Lifts today to start talking to a Home Elevator expert.

Why Choose Us?
Our Products
Testimonials
Recent Projects

As America's leader in home elevators, we understand your connection to your home and we realize the important role our products have in your lives. That's why Nationwide Lifts is the only residential elevator company to offer its customers a large selection of products, the industry's best warranty, 24/7 phone support and a network of offices across the United States.